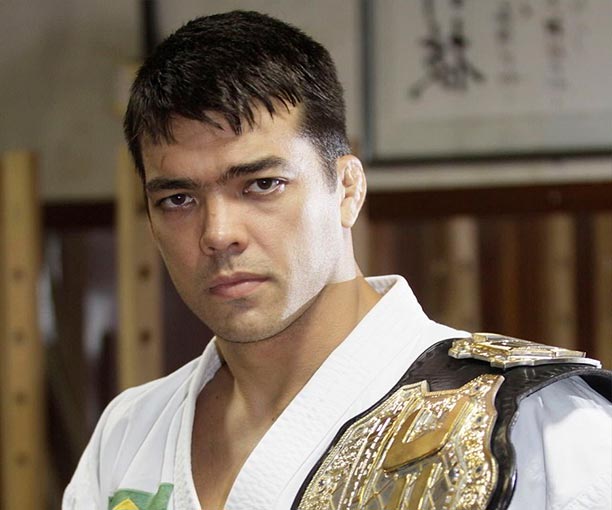 Today we want to dispel another myth that karate is useless in real fights by presenting you with an explicit representative of the Shotokan (Shotokan) style of karate.  His name is Lyoto Machida.

Lyoto hails from the city of Salvador.  He was lucky to be born in the family of a master of the Japanese Shotokan Karate Association.  His father, Yoshizo Machida, is the head of the Brazilian branch of this Association.  Thus, from the earliest years, Lyoto began to practice karate and by the age of 13 received his first black belt.  However, his interest did not stop only on karate, in parallel with this he studied both sumo and Brazilian jiu-jitsu, and a little later he received a black belt from him.  Such a wide range of hobbies certainly had a huge impact on the fighting technique in the UFC ring.  Long racks from Shotokan, high-kicks (high kicks) and lightning speed of rapprochement – all this became his “calling card”.  Now a little about his merits.
Success at UFC

Lyoto Machida began his ascent from the preliminary fights of UFC 67, defeating Sam Hodger, and at UFC 70 he already played in the main tournament and again won.

Machida left his line in the history of UFC after the UFC 98 championship, where he defeated Rashad Evans, having brought Evans the first defeat, and continued his series of unbeaten fights.  This fight brought Lyoto the UFC light heavyweight title.

Here is a brief overview of that battle:

As we can see, Machida directly uses elements of the Shotokan style: here there are relatively long stances and very accurate and powerful kicks to the head.  By the way, Lyoto always came to kimono for his fights, giving his respect to karate.

Lyoto received his first defeat in a scandalous rematch with Mauriciu Roi (aka “Shogun”) in 2010.  Although earlier, Machida won by unanimous decision, nevertheless, it was subjected to great criticism.

Like any fighter, Lyoto has his own “crown kick” and this, as we said, is a high kick to the head (hi-kick).

Here are his TOP of the best knockouts:

Just look (2:04) on the most accurate high-kick in the head!  According to statistics, every third victory Machida ended for the opponent by knockout.

Another very colorful fight took place between Lyoto Machida and Chail Sonen in the framework of Bellator 222. Machida wins an unconditional victory.  And again thanks to precise kicks.

Thus, Lyoto Machida proved to the whole world that karate in the UFC ring is just as wealthy as any other types of martial arts, and it all lies in the skill of the master.

In addition to Lyoto, the UFC also has other equally prominent representatives of the karate world: